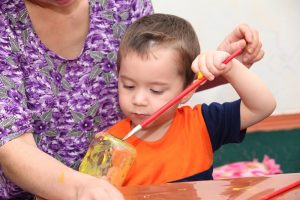 To be very honest, an accurate diagnosis of autism spectrum disorder is not possible. Diagnosis is always based on observation of an individual’s behavior, development, and communication levels. Detection of autism symptoms is important. The word “syndrome” has been added to autism because the symptoms are both varied and many. Autistic people are a very heterogeneous group.

An autistic person typically suffers from impaired development and lack of reciprocal social interaction.  Autistic people are largely involved in their own world. They avoid eye contact while speaking to neuro-typical persons. Social interactions, whenever they occur, are stilted and mechanical.

Autistic individuals are also impaired in imaginative activity. This leads to reduced communication ability. They don’t respond to instructions. The impairment affects both nonverbal and verbal skills. It is estimated that approximately 40-50% people with autism never develop any functional use of language. Even if an autistic person finally manages to develop language sills, their speech is markedly different from what a neuro-typical person may sound. Even children having language disorders often overcome the condition at a later stage. But that’s hardly the case with autistic children.

“Echolalia” is the word often used to describe language and speech conditions among autistic people. It refers to the parrot-like way in which such people repeat what is said to them. One of the commonest autism symptoms is pronoun reversal. An autistic person is usually unable to understand abstract speech or label objects. Instead, they develop an unusual speech pattern or speak words in bits and pieces. These words are largely uncommunicative but their meaning is clear to people who are familiar with the autistic person, like family and close friends.

Dysprosody, or abnormal speech melody, is one of the major autism symptoms. Here, speech is often characterized by a rise in volume at the end of a sentence, or a monotonous tonal quality.

Autism Employment Opportunities on the Rise

5 Teaching Tips for Children With Autism

Adult Autism Apps for those on the Spectrum