Home / AUTISM / The Everyday Struggles of Autism Children in India 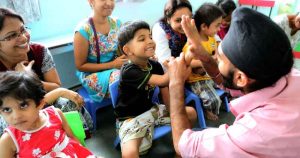 Children having autism spectrum disorder are physically indistinguishable from their neuro-typical peers. As a result, they are usually considered as disruptive, misbehaving, or defiant. The Indian society doesn’t empathize the challenges that autism children face, the way it does in the case of people with visible disabilities.

People with autism are subject to widespread discrimination in India. They are often prevented from participating in recreational and popular activities. Schools are reluctant to take them. Employment of individuals with autism is almost non-existent in the country. They are often rudely told to get off public transport.

Children, in India, are mostly assessed on their academic performance. Parents harbor huge expectation from their kids. Under such circumstances, it’s very difficult for parents to even accept that their child is different. Autism children are often the targets of harassment in school because their classmates can’t understand the practical and genuine difficulties that a child on the spectrum faces.

Experts say that there’s a pressing need for making education inclusive in the country. But unfortunately, the policies of most schools are strongly exclusionary and they are become more every day. Students earning high scores are awarded, while those who “pull down the ranks” are treated as unwelcome. Parents of autism children are often openly asked to take their kids out of the school.

Bullying is also a major issue in most regular schools. No child is born as a bully. They learn bullying from their parents who are themselves behaviorally inclined in such a way. Teachers may also unknowingly promote bullying. A classroom that has a truly inclusive teacher, will have little bullying taking place.

While awareness about autism children has increased in recent times in India, it’s still yet to forge a change in the larger mindset of the population.

What We Really Know About Autism Treatment?