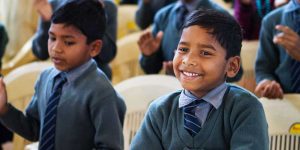 Nature, in a way, is even-handed. Nearly three percent of all children—cutting across countries, religions, cultures, and races—are “special”. They are born with many unique gifts. Mainstream life, however, has little time for these children. Special children challenges in India are often insurmountable. In most case they care considered as a problem.

Physical debilities of special children are often reasonably obvious. It’s easy to identify those whom we have learnt to label as “special”. While it’s undeniably a task that has several barriers, diagnosing the mental build of a child is difficult because of the absence of any definite clinical test. The differences, over time, have to be inferred. Some conditions, like Down’s syndrome, are easier to identify. But when it comes to autism spectrum disorder, the diagnosis becomes more complex. The ambit of autism is wide and hence it’s called a spectrum disorder. This includes a range from the barely identifiable to the well-manifested, not to mention the innumerable shades in between.

But over the least three decades, India has managed to mobilise in an incremental and ponderous way to address requirements of its special children.

But it’s pertinent to mention that the response from the state in this regard has been minimal. Initiatives have usually been from the NGO sector, in terms of concern and care, activism regarding special children’s needs have helped served them better.