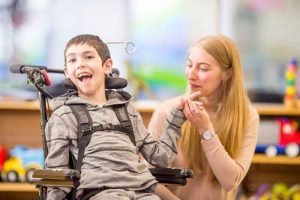 Cerebral palsy refers to a set of neurological disorders or anomalies that affect the muscle coordination. The results are usually permanent. Cerebral palsy is caused by abnormalities or damage inside a person’s brain which disrupts the ability to control the movement and maintain balance and posture of the body.

Usually affecting children from an early life, cerebral palsy could result when the body’s cerebral motor cortex fails to develop normally, when the child is still in the mother’s womb. The disorder can stem from the damage suffered by the brain, either before, after, or during birth. As already said, such a damage isn’t repairable with results being permanent.

Studies have revealed that children affected with cerebral palsy usually have several behavioral problems. Some of them are as below.

Peer problems: Difficulty in speaking and trouble to communicate, are two major problems faced by palsy affected children. They find it difficult to communicate with their peers. They also fail to keep up with their peers physically. This in turn affects socialization. Some children, consequently, get detached from their peer group over time.

Emotional symptoms: A child affected with cerebral palsy, is likely to face difficulty in managing his/her emotions. Temper trantrums, outbursts, and trouble to complete the tasks are common traits.

What it Means if Your Child has Special Needs

Hyperactivity: It is estimated that nearly 20percent of all children having cerebral palsy, are also likely to have attention deficit hyperactivity disorder (ADHD).