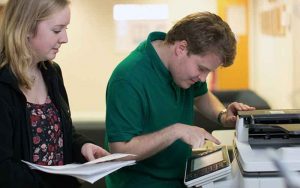 The neurological difference that’s labeled as autism spectrum disorder these days has always been a part of human condition. While there has been a lot of hue and cry over the rise in the numbers of people with autism, it’s most likely because of more sensitive diagnosis, rather than genetic or environment factors.

Creating a workplace that welcomes neurodiversity, would require people to move out of their comfort zone. It’s easy to be around people who are confident and socially adept. But it’s more challenging to interact with a person who is considered as socially awkward and doesn’t conform to socially acceptable norms.

We have to be more tolerant and open to the social missteps and behaviors of those having autism spectrum disorder. Employers, especially the human resource managers, must establish and maintain a high standard of respect and sensitivity for employees with autism and create a safe social environment for them.

Volunteering Opportunities for Individuals with Autism

Employees with autism often report of exclusion by their colleagues. Many have even complained of being bullied and ridiculed. Such employees may not distinguish between harmless teasing and malicious abuse. Employers should watch out for mistreatment. Training the staff to handle autistic employees promotes support and understanding.

Job Skills Training for the Uniquely-Abled