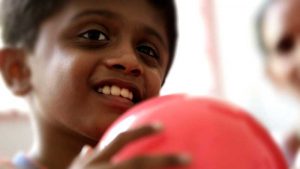 A recent study by a senior neurologist from All India Institute of Medical Science (AIIMS) has revealed that at least one in every 89 children in India, of two to nine years of age, have autism spectrum disorder (ASD).  An extrapolation of this data, based on the 2011 census, means that nearly 2.2 million children have autism in India.

ASD is an umbrella term that includes persons having developmental disorders. Such disorders impede communication like listening, gesturing, and speaking. Autistic children show repetitive behavior and have limited interests.

What causes ASD is not properly known. But boys are four times more likely to have ASD than girls.

Diagnosis of autism in India is still largely misunderstood. Majority of the parents neither have the resources nor adequate support to raise autistic children.

According to doctors, there’s a stigma attached to the disorder. People have to understand that if diagnosed early, autistic children will stand a better chance to respond to adequate help. They can also contribute their bit to the society in many ways. Most importantly, an early diagnosis will help children to become less dependent on others.

One of the easiest ways to detect autism symptoms is when you notice the child not looking at the playthings being shown, don’t give a social smile, and doesn’t respond when their name is called out. Parents should first consult their child’s pediatrician for a proper diagnosis.

A major problem about autism in India is that parents often ignore these symptoms or go into a denial mode even when the pediatrician alerts them. Parents even bring their child for diagnosis as late as six years of age.

But the truth is that an early intervention will help children with autism lead a life like their neuro-typical peers. It will help them pick up age-appropriate activities with proper guidance from psychologists and specialists. Autistic children are unlikely to learn such activities properly at a later age.

Autism Intervention: The Earlier the Better

Getting Started With Autistic Children ABA