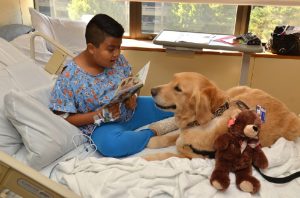 Animals can play several roles, especially in the life of a person who is not neuro-typical, from brightening their day to keeping them away from harm. It’s also usually suggested that animals like dogs and horses to dolphins, can actually provide a therapy to a person. This, in scientific circles, is called animal-assisted therapy.

It has been often claimed that animals can relieve physical pain, soothe the emotionally distressed, reduce blood pressure and heart rate, help develop motor skills, and increase the desire for social connection with those having autism spectrum disorder. In fact, animal-assisted therapy is believed to reduce sensory sensitivity and lessen stereotyped behaviour.

Riding a horse, romping with a puppy, or swimming with a dolphin, all have the undeniable potential to lend a memorable and rich experience for all persons. The founder of modern nursing, Florence Nightingale, wrote way back in 1859 how a small pet, or a bird, can be an excellent companion to the sick and those suffering from chronic ailments.

More than a century and half later, scientists are now investigating the probable benefits of animal-human bonhomie, including visitation and pet ownership programs. Researchers claim that such interaction reduces physical pain and has a positive effect on various physiological factors including depression and anxiety, as well as socio-psychological factors like loneliness and a sense of alienation. Research has also indicated that interaction between animals and humans can reduce aggression and agitation as well as increase social interaction and daily living, among people living with schizophrenia, dementia, and Alzheimer’s.